Feature: Be aware of guns on Vietnamese fishing boats

"We must focus on the building of maritime militias, border and coastal defense militias, emergency response militias and the new reserve forces in order to form a national defense mobilization system which can serve, respond to emergencies and fight during wartimes," said Sheng Bin, chief of the National Defense Mobilization Department of China's Central Military Commission (CMC) in an interview with Xinhua News Agency on March 9, 2016.

Liu Xin, political commissar of the PLA Hainan Provincial Military Command (PMC), once advocated the building of maritime militias. Liu said that relevant regulations by the Hainan PMC and other civil departments on the participation of maritime militias in rights protection activities had been released.

The building of maritime militias was also raised at China's Two Sessions this year. As a result, the issue received attentions from international and domestic media.

At present, China's maritime security environment is getting more and more complex. This calls for an armed maritime force to safeguard maritime safety and the interests of the maritime development.

BEIJING, April 14 (ChinaMil) -- The moratorium on commercial fishing of May is approaching. Now is the short harvest season for fishermen of Sansha City, China's Hainan Province.

Living on the waves. Cui Siyi began fishing in the sea with his father when he was 17 and he has experienced strong typhoon, pirates and law enforcement boats of neighboring countries.

Cui, who is in his sixties, runs a fishing company that has 13 ships.

His daughter and daughter-in-law would stay with a maritime satellite telephone day and night. Every hour, they would ask the fishing situation: "Where are you? How’s the fishing? Any "strange" vessels around?"

Fishermen rush to the forefront

Now, those “fishing vessels” with Vietnamese flags bother Cui the most.

Fishermen of Sanya and Tanmen in Hainan, Beihai in Guangxi and other places reported many times that they were robbed by foreign fishing vessels in the waters of Nansha and Beibu Gulf.

Those foreign fishing vessels are equipped with pistols and submachine guns. A dozen of young crew will usually issue various instructions in Chinese or English and they would speak fluent Vietnamese when they are in desperation.

As early as the 1960s, Vietnamese fishermen began to "carry gun with one hand and spread nets with the other" in the "Maritime Ho Chi Minh Trail" and other relevant waters. From the description of Chinese victims, those armed vessels are very likely to be Vietnam's maritime militias.

The Vietnamese National Assembly passed the Law on Militia and Self-Defense Forces with the 89 percent support rate in November 2009. The law regulates that a set of self-defense militias will escort for Vietnamese fishing fleets.

As the Vietnamese maritime militias became official, Vietnamese fishermen have rushed to the forefront of maritime disputes. 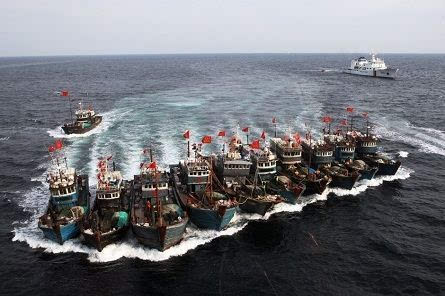 They not only serve as "eyes and ears" of the Vietnamese navy, coast guard and other agencies, and even participate in the fight by directly threating and attacking Chinese fishermen and squeezing the space of Chinese fishing activities step by step.

"Vietnamese fishing boats are broken and small and their living conditions are poor," Cui Siyi still has memories of the revolutionary friendship between China and Vietnam.

From the late 1970s to the early 1980s, Cui would often go to the Nansha Islands with the fishing team of his village. The fishing team is rough with diesel-powered fishing boats dragging small sailboats.

At that time, the relationship between the two countries was not intense. Fishermen of the two sides will often encounter a variety of maritime catastrophes such as diesel or fresh water leakage, storms and sudden serious illness.

There was once a common practice for seeking help. When they need help, they would dock the fishing boat at the far outer reef, send two crew members on a dinghy to seek help. One crew member will hold a white half sleeve to show that they have no ill will.

"How do you do" is the best-known English phrase for Cui Siyi because that is a must-language in the above scenario. After they explain in English and gestures what they want, they would upload seafood, beer and other gifts from the dinghy to the other side. Usually, the other side will not refuse to help.

As the South China Sea situation gets intense, mutual help between fishermen of the two countries is long gone.

It would be suicidal for Chinese fishermen to seek help from the Vietnamese side. Cui said Vietnam maritime militias often take the initiative to attack and thus his fishing boats have to take a detour.